Wexham Bowls Club was formed in 1967 after a few people who used to meet at the green for friendly games decided to form a committee.

The original clubhouse was a constructed totally of timber and was originally a haberdashery shop in Peascod Street, Windsor. The building was purchased in 1970, dismantled, moved and rebuilt by the founder members and others who by then had also joined the relatively new Club. The money to purchase the building was acquired by personal loans from the members and other fund raising activities. During the interim years, vast improvements were made to the original building, including an extension for a new bar area and toilets for men and women, a complete refurbishment of the kitchen was also undertaken to meet the current health and safety standards. Central heating was installed to replace the gas fires that served their purpose but were not as safe as a modern heating system. UPVC windows were installed to replace the old rotted wooden framed windows to retain the heat and also increase security. A smaller timber building was purchased and built as a men's changing room / committee room.

In 1986 when hurricane force winds swept across Britain, the roof of the old building was ripped away and landed in the neighboring school sports field. Funds that had been put aside to contribute to a new building had to be utilised to replace the roof which delayed plans to purchase a new club house until a later date. The original club which was full of character was ageing fast and even though over the next decade, in excess of £30,000.00 was spent on maintenance and also hours and hours spent voluntarily by members on the upkeep, it was becoming very clear that a new building was becoming a priority.

In 1993 the club took over the maintenance of the green from Wexham Parish Council, this meant having to purchase our own equipment and a building to store it in, this again drained the funds that were being raised to go towards a new club house.

In 1994 the club was honored to have one of our lady members, Pauline Vass, elected as the Ladies county president of the former Buckinghamshire County Women's  Bowls Association. 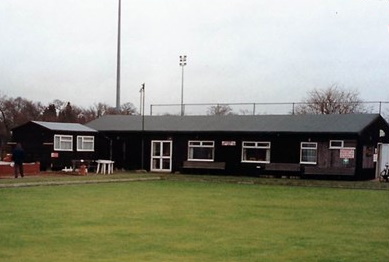 After a tremendous amount of work from committee members, members and friends of the club, in 1997 we were thrilled to have our application approved for a grant from the National Lottery for £72,100.00 to be put towards our new club house, thanks to some fantastic fund raising activities and further grant of £5,000.00 from the Slough Estates Sports & Social fund we had raised over the £100,000.00 required to build the existing club house.

The official opening date of the new club house was September 12th 1997 and the event was attended by a number of officials from the local council including their worships the Mayor and Mayoress of Slough, also in attendance were representatives from the former Buckinghamshire County Bowls Association and English Bowling Association.

Wexham Bowls Club is proud of its history and will always do what it can to further the sport of lawn bowls, a sport that is open to all ages.